Nobby is nationally recognized for his presentations, seminars, workshops and business coaching.

His delivery of relevant topics keeps audiences tuned in and thirsty for more information. By wrapping wisdom in a package of wit, music and humor, he captures the crowd.

From his career as a professional baseball player to founding one of the largest accounting firms in Northeast Ohio to his successful entrepreneurial ventures, Nobby’s life experiences, both successful and challenging, result in humbling and inspiring presentations. Ironically, his biggest personal challenge to overcome has defied conventional thinking in becoming a career public speaker!

Simply stated, Nobby Lewandowski stutters. On April 6th, 1965 a turning point occurred in his life. It was on that day the managing partner of the major accounting firm who employed Nobby informed him that he would be better suited for a position that required minimal verbal skills as this person thought his flawed speech represented an “inability to communicate”. Nobby eventually left the firm and he clearly “communicated” to his boss that his “inability to speak fluently” should never be confused with an “inability to communicate”.

Determined to never let his speech challenge be an impediment to his success, Nobby has become a huge success in the arena of public speaking despite being a stutterer. He helps his audience understand facing adversity and obstacles can result in building strong character and be the foundation for success. By facing his own challenges, Nobby has successfully leveraged what most would think to be a “liability” into a unique and impactful “asset”.

In addition to being inspirational, entertaining and interactive, Nobby’s presentations are packed with practical, useful information. He consistently receives positive feedback, standing ovations and in some cases, individual letters from attendees illustrating how his message positively impacted lives and perspectives. He inspires confidence and composure to make the best better and motivates inner strength and competitiveness.

Nobby truly proves the theory that “It’s What You Say, Not How You Say It!”

*The only other Benedictine graduate in both Halls is Chuck Noll former Pittsburgh Steeler coach. 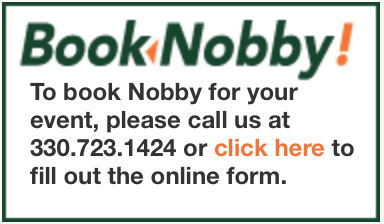